Spotlight on some athletes from EuroBasket in Vegas 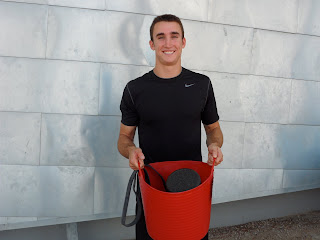 Kyle Plath was the winner of one of the training baskets. Kyle is a 6'4 guard that played college basketball at Wisconsin Lutheran College.

Jon Holmes is not pictured, but was the winner of the second basket. Holmes played a Bethune-Cookman University in Daytona Beach, FL. 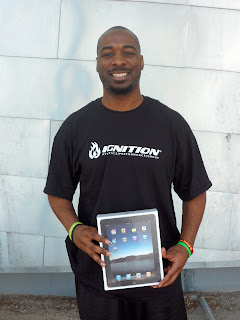 Aaron Davis was our winner of the iPad. He played collegiately for Faulkner College and University of Florida. Davis signed with the Miami Heat in 2001 but was released early, and went on to play in Poland. Davis played with the Sacramento Kings summer league team, and then played in the United States Basketball League. He has also played with Phoenix Suns in a summer league, in the Japan Basketball league and is high school friends with Tracy McGrady of the Houston Rockets starring in two of his Adidas commercials.

Justin Taylor was one of the most impressive athletes tested and his results spoke volumes about the impact Ignition has on athletes. He worked our Tayshaun Prince camp with ProCamps and took in everything he could when watching our trainers coach the kids. He took what he learned in Lexington and applied it to his own training for Vegas. As a result, his numbers blew away others from that day. Coach Clif Marshall pointed out Taylor's experience with Ignition and immediately the other guys in his group were asking for coaching and tips to improve their verticals, lane agility and 3/4 court sprints. Taylor played in college at Tennessee Tech. He showed he is clearly a good listener and learner, and it was great to see an athlete working so hard to improve.

Another athlete we met with an interesting story was Kent Tuttle. His vertical may have been the best of the day, and we quickly found out why. Kent didn't spend his college days on the basketball court, but instead playing volleyball for BYU... so that explains his jumping ability. He grew up playing basketball but had only been focusing and dedicating himself to it for the past couple of months. He's been playing in different camps across the country as he tries to make the switch from college volleyball to professional basketball. And from what we saw in his testing with Ignition, he's off to a great start.
Posted by Kaci Kust at 6:47 PM