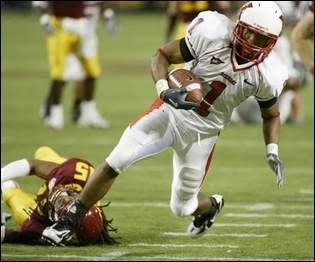 "We are honored to have Dustin Woods join our Performance Staff at Ignition. Dustin brings instant credibility as a Team Captain and four year starter on the Miami University Football Team. In addition, Dustin has strong Christian core values that the makeup the Total Athlete approach to training the body, mind and spirit at Ignition,” stated Marshall.

Woods brings relevant experience and expertise to Ignition’s group of Combine prep specialists. Originally an NFL hopeful himself, Woods’ injuries kept him from pursuing a pro NFL® career despite the fact that his performance placed him in the top 3 of all wide receivers in 4 of the 6 tests administered at the 2010 NFL® Combine. Woods will be among distinguished talent as well – for three consecutive years, an Ignition combine trainee has ranked Top Performer in the NFL Combine.

A natural leader on and off the field, Woods’ MU teammates voted him team Captain despite his early injury that kept him sidelined much of his senior year.

"It was really interesting to me that a young man (Woods) who hasn't practiced since the first week because of an injury gets the second-most votes on the team," said Miami University Head Coach Michael Haywood. "It shows a lot about his character and his leadership,” said Haywood.

In addition to his utilizing his expertise in speed training, Woods will be responsible for instilling the Ignition philosophy and character development that makes Ignition unique. Woods’ experience, dedication and strong Christian character are a perfect complement to the Ignition Athletic Performance Group.

“When all else seemed to go a different direction than what my family and I hoped and planned, God put this opportunity in front of me at the right time. You can have all the technology, equipment and sponsors this industry can offer, but cannot put a price on the staff and personnel who come to work and coach you everyday,” said Woods.