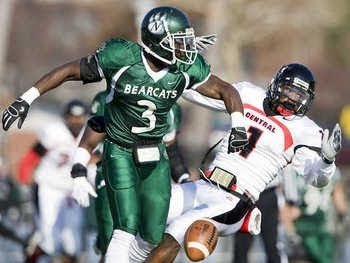 Ignition is excited to be working with Ryan Jones, cornerback from Northwest Missouri State. Ryan came to Cincinnati the first week of January to begin preparing for the NFL Draft. Ryan, originally from Liberty, Missouri, is majoring in corporate recreations and also minors in coaching. As a full time student athlete, Ryan not only succeeded in the class room, but on the field as well. While ranking 9th in the nation for interceptions and 5th in the nation for passes defended, Ryan also compiled many awards for his performance: 2010 AFCA DIvision II Coaches' All-America Team, 2010 Daktronics 1st-Team All-America, Two-Time 1st Team All-MIAA, 1st Team All-Region. Ryan will also be playing in the Texas vs. The Nation game in early February.
Posted by Clif Marshall at 2:13 PM