Staying In Shape In A Shapeless Offseason 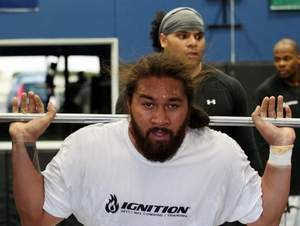 Director Clif Marshall from Ignition Performance of suburban Cincinnati is hearing more and more from agents of veteran NFL players who want structure in their off-season conditioning program, now that the NFL has locked out the players and made team facilities off-limits.

When his telephone rang on Wednesday morning, Clif Marshall wasn't so much surprised by the voice of the friend and agent at the other end of the line as he was by the player representative's request: The agent was calling to see if a veteran client who plays for the Jacksonville Jaguars, lives in Mississippi and had never been to Cincinnati, might travel North and make use of Marshall's facility in The Queen City to train and stay in shape during the lockout.

Such calls, Marshall told The Sports Xchange this week, have become a lot more commonplace as the lockout moves into a second week.

"I think we're going to see more and more of the veteran clients," said Marshall, the performance director at Ignition Performance in suburban Cincinnati, and a former Bengals staff member. "There's definitely been an increase already. And the longer this thing goes, the more we're likely to have."

The lockout, and the reality that it could linger for months and perhaps wipe out all the minicamps and OTAs and even delay the start of training camps in the summer, has prompted some diligent veteran players to seek alternatives. And now that the calendar has turned to a period of the year when many franchises would typically commence their offseason programs, and players are precluded by the lockout from using team facilities, many have turned to independent training programs.

Coaches around the league are clearly concerned about their players maintaining a semblance of football conditioning during the lockout.

"Let's hope," one AFC head coach told The Sports Xchange, "they don't forget about that stuff."

Mark Verstegen of API and CES' Chip Smith - two of the most well-known trainers in the country, and pioneers who helped turn a onetime cottage industry into much more than a niche pursuit, and who have both worked with dozens of first-round choices in advance of the combine over the past two decades - agree they have seen a marked increase in the number of veteran players suddenly making use of their renowned facilities.

Lesser-known training centers, with clientele that probably can't approximate that of Verstegen or Smith, have doubtless experienced the same. The number of veteran players, who normally would use team facilities this time of year, and perhaps get in an offseason week or so at a place like CES or API, is apt to increase at those places as the lockout goes on.

Some agents have adopted a more proactive approach in directing their clients to workout facilities they've used in the past to ready prospects for the combine. It has become a lesser-known, but still undeniable byproduct of the lockout.

"The phone has started ringing off the hook," said Smith, the founder of CES in Atlanta, and now other locales. "I think we have 15 or 20 (veterans) coming in next week. None of us likes to see this (lockout) happening, that's for sure, but definitely it's meant more business for us. This is normally a slower time for us, once the combine is over, but it's not slow now."

The Sports Xchange colleague Howard Balzer opined in an excellent column earlier this week that attorneys are going to make a lot more money now, with the labor dispute having moved from the negotiating table to the courtrooms. Well, the top trainers, like Smith, Verstegen, Marshall and others, figure to benefit as well.

Smith, who was in Blacksburg, Va., for the workout of former Virginia Tech quarterback Tyrod Taylor when he phoned The Sports Xchange, noted that New Orleans offensive right tackle Jon Stinchcomb had phoned about training at the suburban Atlanta complex in coming weeks. And Stinchcomb, rehabilitating from knee surgery, probably will bring some linemates along with him.

Verstegen, who has for several years served as the director of performance for the NFLPA, has partnered with the decertified union to provide services to players at API's four facilities. The training is called "Solidarity Services," and the goal is to create what Verstegen and the players' association have termed a "Lockout Locker Room" for players who want to maintain conditioning during the work stoppage.

"We can create a kind of refuge for the players," Verstegen said via e-mail from Marco Island, Fla., where he was attending the NFLPA's annual meetings. "We want them to maintain training and rehabilitation and nutrition, and not to have that diminished. And guys know they can do it with us in top facilities and with world-class, proven and knowledgeable trainers."

The other beneficiaries of the lockout are college training programs, with veteran players returning to campuses to work out in facilities they once used. The cost is obviously cheaper - facilities such as API and CES can charge as much as $300-$500 per week - and there is a familiarity element as well.

Said Smith: "I was walking around down here in Blacksburg the other day, and I bumped into three or four guys who had trained with us in the past ... and had come back to Virginia Tech to work out. It's definitely happening. There are guys who simply might not have the (financial) wherewithal to be able to go to a facility, so they're turning to the college programs they know."

Since most well-known facilities have experienced and proven trainers, guys who have worked in the past with veterans seeking to maintain conditioning in this very strange offseason, the work is helpful. One downside is that players could suffer injuries while working out and, without a team- or league-maintained health plan in place, there could be some ramifications. Some players, in addition to paying for their own health plans now, have been forced to fund disability policies.

The boon for the training facilities, Marshall allowed, can be financially rewarding, but is nonetheless a bittersweet one.

"I've worked both sides," said Marshall, on the Bengals' staff 2005-07. "You feel for the (team-employed) trainers right now. They're usually accustomed to working right now with the players and they can't do it. But players have to do their work somewhere
Posted by Clif Marshall at 10:30 AM