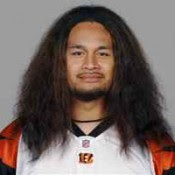 Even though there’s been a long work stoppage in the NFL, that hasn’t stopped Cincinnati Bengals linebacker Rey Maualuga from maximizing his workouts.

Maualuga has been training at Ignition Athletic Performance Group in Mason, Ohio, and according to company Performance Director Clif Marshall the third-year Cincinnati player from Southern Cal bench-pressed a personal-best 405 pounds recently.

Marshall noted the achievement on Twitter, one of the few times athletes have used the social networking site to report good news. Maualuga’s feat also has been a hit on YouTube, and Bengals fans everywhere can get a glimpse of the team camaraderie while they’re working out.

With several teammates cheering him on in the background and offensive guard Bobbie Williams spotting him, Maualuga was set. Defensive tackle Domata Peko had a side view, as Maualuga thrust the bar to the sky. He held it for just an instant, but that was enough to trigger an eruption, as those in attendance charged the bench to congratulate Maualuga.

This group, a mixture of veterans and young players, on both offense and defense, can only be beneficial to the Bengals as they attempt to turn things around after a dismal 4-12 2010 season.