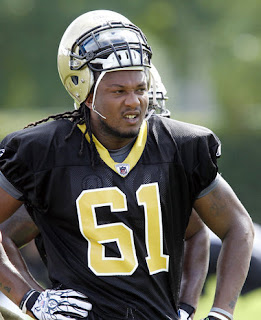 The New Orleans Saints' two first-round draft picks were not in uniform during the first day of training-camp practice, but a late-round pick made an impression on the second-team defense and special teams Friday morning.

New Orleans Saints' Nate Bussey had a good first day at camp.
Former Illinois linebacker Nate Bussey, one of two seventh-round picks, took snaps on defense and was featured prominently in special teams' drills.
Voted the Special Teams Player of the Year for Illinois last season by his teammates, Bussey said he expects to earn his initial playing time through kickoff and punt coverage and blocking.
"Special teams is where I plan on making my first impact," said Bussey, who received honorable mention for the All-Big Ten team. "I'll be ready when my number is called for on defense, but I don't take special teams lightly. That's how I started in college, and I still played there my whole career, even when I was staring my last two years."
The addition of Bussey and teammate Martez Wilson (third-round pick) plus the recent re-signing of Danny Clark gives the Saints three Illini linebackers.
Bussey, listed at 6 feet 1, 220 pounds, said he likes the rookies he is joining and was adamant the group will bring enthusiasm to the sweltering training-camp practices.
"We're all excited to be here and ready to bring in a lot of athletic ability to the team," he said. "All the rookies are coming in with a level head and perform to our highest potential. We believe in the coaches and want to perform so they believe in us."

PATRICK PART OF DEEP SECONDARY: Another Saints defensive addition, rookie cornerback Johnny Patrick (third-round pick), was ahead of the curve on day one of training camp, according to assistant coach Tony Oden.
Patrick, a 5-11, 191-pounder from Louisville, attended the Drew Brees-organized workouts at Tulane in May and June, and Oden said that experience helped his schematic knowledge in early workouts.
"It's almost like we didn't have to do much," said Oden, who is replacing Dennis Allen -- who left to become the defensive coordinator with the Denver Broncos -- as secondary coach. "(Patrick) knew the verbiage, all the calls and the communication already based off what we did last year. He also knew the language, our personnel groups and our checks. It was definitely easier for him through practice because he knew how to line up already."
Oden said Patrick, who intercepted five passes as a senior, will provide a "great skill set" that includes the ability to play press coverage and even blitz.
According to Oden, safety Malcolm Jenkins and cornerback Tracy Porter have welcomed Patrick into the fold.
"There's a good group of older guys to take care of him in the secondary," Oden said. "Malcolm and Tracy make it a lot easier for a young guy. They're quick to point out any coaching thing I might have missed."
Patrick is also expected to play on special teams, and he played as a gunner on punt returns during morning drills.
Oden said that would be necessary experience for Patrick, with a stacked secondary likely to not allow much playing time in the defensive backfield.
"He needs to put that time in on special teams and earn the playing right," Oden said. "We actually view those as defensive snaps anyway, because he's tackling and getting field action."