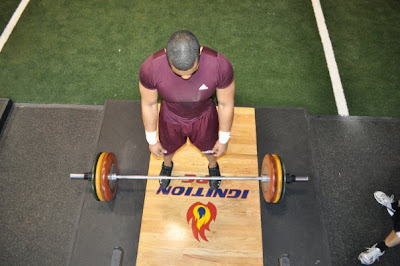 Never sacrificing form for heavy weight is like saying “quality over quantity.”  As a society, we tend to recognize our success with numbers.  This is also true in the weight room.  Big numbers mean that you must be a good lifter. However, big numbers in the weight room only measure one thing.  In an unsupervised training session, there usually isn’t as much attention to how well you complete the lift.  For a lot of people, deadlifting 400 lbs looks great on a strength card or piece of paper, but what if the form of the deadlift consisted of a rounded back and the knees locked before the shoulders came up?   Then this person most likely shouldn’t be deadlifting 400 lbs.  Making sure that the quality of the movement is mastered before actually training the movement can be the difference between performance enhancement and injury. Jumping weight too quickly and letting form break down will do way more damage than good.

It starts with the assessment of the athlete and how they move before the onset of activity.  We use the FMS (Functional Movement Screen) with some of our athletes to get to know what their movement patterns are like right off the bat.  You can get to know a lot about your athlete by just learning how they move.  There are even things to learn about an athlete’s warm up and their quality of movement and/or stability. Assessing athletes at the beginning of their first session will not only give you valuable information about their developmental level and movement patterns, but it also gives you a chance to get to know your athlete. After assessing that the athlete has the mobility and stability to perform the exercise, it comes down to discipline and accountability that the athlete is maintaining proper form and technique. For example, we stay with relatively light weight for Olympic lifts so that the emphasis is not on the weight itself, but on the speed and quality of the movement.

Numerical goals are still very important to set in the weight room.  Along with feeling stronger, it is important and motivating for athletes to see their numbers going up.  However, there is a time and place for that.  Once the movement is learned and there are no limitations that increase the risk of injury - train it and set goals. Never sacrifice form for heavy weight.  Train hard, train smart.

By: Ben Creamer CSCS, USAW
Posted by Clif Marshall at 12:56 PM No comments: 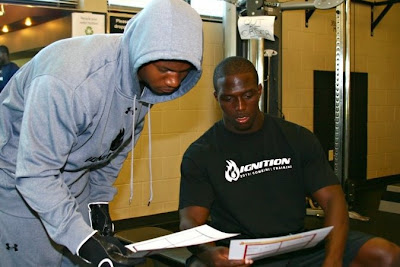 1.Never sacrifice form for heavy weight.
2. Start at the hip and workout everyday in the weight room.
3. Train in the weight room to be fast on the field. (Ground based movements)
4. Train fast twitch muscle fibers using triple extension of the ankle, knee and hip. (Olympic movements)
5. Work opposite muscle groups equally. For every push (bench press) do a pull (pull-ups). For every set of a quad exercise (front squats), do a hamstring exercise (RDL)
6. Have a strategic plan that will allow athletes to get stronger and to add lean muscle mass. (A periodization that implements progressive overload)
7. Train movement patterns, not just muscles (push, pull, rotate, lunge, and squat)
8. Explain your theory, mission and philosophy to your athletes so they will “buy in” to the program.
9. Train muscles with the “Time Under Tension” theory. Try a 3 second negative (down) and a 1 second concentric (up) and work it through the full range of motion.
10. Train unilateral exercises (single arm, single leg movements)
11. Use a pre and post test evaluation for your athletes to show marked improvements in strength and power gains.
12. Set Performance Goals for each athlete and help them to reach those goals by breaking down barriers.
By: Clif Marshall MA, CSCS,
Posted by Clif Marshall at 9:05 AM No comments:

BOBBIE WILLIAMS EAGER FOR HIS RETURN 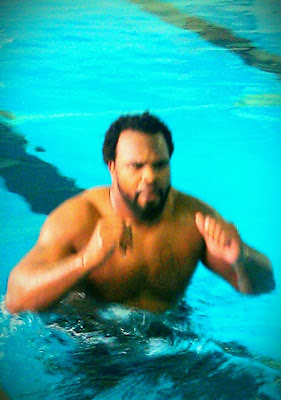 With his hearty laugh and engaging smile, Bobbie Williams looked like a man ready to make up for lost time on Wednesday.

The veteran right guard missed the first four games after violating the league's policy on performance enhancing substances, which ended up being an over-the-counter diuretic.

Williams, though, said there was one person to blame for the situation - himself. The positive test came before the lockout, but Williams did not know his appeal was denied until after the final preseason game.

"We're responsible for what goes in our body. The whole thing could have easily been avoided," Williams said. "You live and you learn and it cost me four games with my teammates. The good thing about it is I was given this opportunity to come back and make good."

He was also determined not to let it wreck his season.

Working out for the past four weeks with Clif Marshall at Ignition, Williams went through three-hour conditioning sessions five days a week. Williams is down to 329 pounds, the lightest he has been since entering the league in 2000 with Philadelphia.

"The first thing I said when this happened was I was going to turn this from a negative into a positive and I have," Williams said.

Working out with Marshall and the crew at Ignition had an added advantage because Marshall had worked with the Bengals training staff as an assistant and considers strength and conditioning coach Chip Morton a mentor. He also worked with many of the current players, including Williams, during the lockout.

Said Williams: "It was a huge advantage because he had the contact I didn't have with Chip and coach (Marvin) Lewis getting feedback on what to ... address."

Marshall said that the first couple of weeks of the program with Williams focused on conditioning, but the last two weeks were more football specific drills, like sled work. Former Colts linebacker Tyjuan Hagler and former Bengals linebacker Rashad Jeanty also trained with Williams and helped out on pass protection sets.

"The biggest thing was reviving his mental and spiritual health, especially after the way the suspension happened. What I respect is that he used this as motivation," Marshall said.

With his reinstatement, Williams is on a one-week roster exemption. If he is to play on Sunday at Jacksonville, the Bengals will have to release a player later this week. Lewis said they would evaluate how Williams does in practice this week before making a decision.

Before the suspension, the Bengals were having success running it to the right side during the preseason with Williams and tackle Andre Smith.

During the first quarter of the regular season, the running plays were more to the left as they led the league in number of running plays behind left tackle with 33. Of the 105 running plays, only six have been up the middle, a league low.

Cedric Benson is tied for second in the league in carries and has two 100-yard games, but there has been a twinge of disappointment from him this week over the direction of the running game since the opener at Cleveland.

Said Benson on Wednesday: "It's kind of tough for any player who takes pride in what he does. Communication is always important, but at times we sometimes struggle with communicating. That being said, you never know what is around the corner."

While the opener against the Browns was in the ground-and-pound style that some expected (33 runs, 31 passes), the last three games have had more passes than runs.

A big part of that, though, has been an inability to convert on third down, and trailing most of the time.

But as left tackle Andrew Whitworth noted, there are going to be opportunities for everyone.

"Some games we may need to throw it more and some games we're going to need to pound it," he said.

Many are hoping that the second half against Buffalo, where the Bengals rallied from 14 points down for a 23-20 victory, is more of a template for future games.

In that half, they scored on four of five drives but were equally adept at both running and passing.

On the ground, they ran it 16 times and averaged 6.9 yards per carry.

Even though offensive coordinator Jay Gruden understands Benson's concerns, he also realizes that there is a tough balancing act.

Said Gruden of Benson: "When Bernard Scott comes in for him he feels like we don't love him anymore. When we pass a couple times on first down and we have to punt he gets a little upset. Most great competitors are like that.

"He just has to channel his emotions and understand we're all trying to do the best and win the game. Whether he gets the ball 10 or 50 times, I don't care as long as he wins the game."

Fullback Chris Pressley is also one who thinks that more consistency with the running game is ahead.

"We haven't put a full game together. It just comes with working together and playing as a team," he said.

Article Written By: Joe Reedy / cincinnati.com
Posted by Clif Marshall at 9:01 AM No comments: