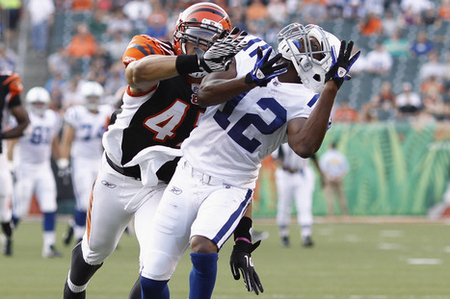 Joe Robbins - Getty Images
11 months ago: CINCINNATI, OH - SEPTEMBER 1: Taylor Mays #47 of the Cincinnati Bengals draws a pass interference call while defending a pass for David Gilreath #12 of the Indianapolis Colts in the first half of an NFL preseason game at Paul Brown Stadium on September 1, 2011 in Cincinnati, Ohio. (Photo by Joe Robbins/Getty Images)


With the resources of NFL players these days, it is safe to say they can travel about anywhere in the world. Rio de Janeiro, Dubai, the London Olympics. If we played Where In The World Is Carmen San Diego Taylor Mays, the answer would be Cincinnati. It is always nice to see the players working in the off season, even more so when it is in ear shot of the coaches and staff. The Mother Ship's Goeff Hobson caught up with Taylor about the off season this week after a workout at the Ignition Gym.


I know physically I'll be OK,

This the first time in his career he has had the same defensive coordinator in training camp. With the extra season to learn his role, it is widely projected that this is the year to prove himself and he knows it.

I'm just looking forward to the chance to make some plays. Yeah, I'm trying to mesh the physical and the mental.

I'm taking the things I learned from Mark, Hue and Zim and put them all together mentally and physically," Mays said. "That's a lot of technique. The consistency of the technique is the biggest thing for me. The technique hasn't changed, but Coach Zimmer is very detailed in what he wants. Having that consistency and being able to repeat it all the time, that's really what I'm trying to do going into training camp.

What's nice in all this is, he hasn't been alone. His workouts are commonly accompanied by other Bengalsplayers. Most notably our starting middle linebacker Rey Maualuga, who has been his proverbial Robin of workout partners (or is that the other way around). The most surprising aspect of Mays were his conversations with Troy Polamalu.

Troy's very quiet and humble, but he's got a lot of fire at the same time. His way is not to vocalize it but show you, He's one of the best examples to watch just because of the way he prepares. It's kind of hard to watch (tape of him) because you never know what he's really thinking in his head before he makes the play or what defense they're playing.

I'd say the coaches like the fact Taylor has been studying his craft and that he can put what he has learned in perspective. However we are a long way from naming starters at this point in the year as evidenced by Marvin Lewis in a Cincinnati Enquirer interview with Joe Reedy.

The competition will be one that we will be excited to watch throughout. I don't think there is a clear cut leader right now.

All that can be said at this point is that whoever ends up taking the starting strong safety position will have to outwork Taylor Mays. I know I will be pulling for Taylor to prove himself for the job.
Posted by Kaci Kust at 12:30 PM